WATCH LIVE TV ON YOUR IPAD, IPHONE OR OTHER MOBILE DEVICE.

WITH BROADWAY, YOU HAVE YOUR TV, YOUR WAY!

Introducing Broadway 2T the simple way to watch live TV on your iPad.

Experience the ultimate in entertainment and never miss your favourite Sports events, TV soaps or live News as it unfolds in front of you anywhere in the world.

Broadway is not only incredibly intelligent, its also one of the easiest to install dedicated personal video device that brings Live Freeview or Satellite TV to your iPad, iPhone or Android tablets with Googles new Android Honeycomb.

Broadway makes it easy for you to watch live TV on your iPad screen, in your home through Wi-Fi or via the Internet when you travel. Broadway not only works with the iPad but also works with the iPhone, Android phones or tablets, plus Windows PCs or the Apple Mac!

Watch your favourite TV programs while youre in the garden, sitting in the kitchen or anyplace in your home where you have a Wi-Fi connection. 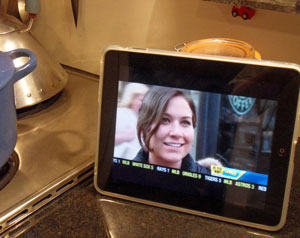 Watch TV on your iPad anywhere in your home where there is a Wi-Fi connection. And with one touch of the screen, the channel selector disappears and the TV programme occupies the full width of the screen.

With Broadway, brought to you by the brilliant engineers at PCTV Systems, you have Your TV, Your Way!

Inside Broadway are two Freeview TV Tuners whilst on the back are video connections to plug in your satellite or cable digital set top box too. Cleverly, the Broadway box streams two video signals at the same time which means you could be watching one TV, Satellite or Cable channel on your PC whilst another family member could be watching another Freeview TV programme on a mobile device like an iPhone or iPad.

Having Broadway at home means never having to miss your favourite TV shows, sports events or programmes series again!

WATCH SATELLITE TV ON YOUR IPAD TOO. ANY WHERE, ANY TIME!

Broadway includes an audio/video input with S-Video or Composite connectors. Connect your satellite set top box to Broadway via the audio/video inputs and watch satellite TV on your iPad anywhere in the world. Broadway comes with an Infra-Red (IR) Blaster which can remotely change your channels on your Freeview or Sky satellite TV box directly from your mobile device. With one touch of the iPad screen, commands are sent to Broadway telling it to use the IR Blaster to change the channel on your satellite TV box. From anywhere in the world, you can watch your best TV programs on any satellite channel!

Broadway can use its IR Blaster with cable TV boxes too. You can also connect an analogue video camera or webcam and turn Broadway into a video surveillance solution too, viewable Live from your mobile device.

Changing channels is quick and intuitive. Control what you want to watch with a touch of your finger on the iPad screen. 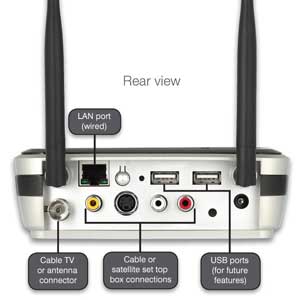 Broadway has connections for a TV aerial, plus a satellite or cable TV box.

BROADWAY IS EASY TO SET UP

Setup of Broadway is easy. Connect Broadway to your TV aerial or set top box and connect it to your home router using the network cable provided. Then turn on your iPad, iPhone, MAC or PC and enter http://distan.tv into your browser. Scan for channels and then start watching live TV! Its that simple.

To watch your TV when youre travelling outside the home, just configure your home router to allow remote access to Broadway. Not sure how to do this? Visit www.portforward.com where you get a step by step guide to walk you through it. Alternatively you can call our Broadway support team in the UK and well guide you through it free of charge.

HOW DOES BROADWAY WORK?

Broadway is a stand-alone, low power, device. All the settings and set-up can be done through your Internet browser on any Apple or Android mobile device.

WHATS IN THE BOX

To cater the needs of all customers, we offer two delivery options at checkout so you can choose one which best suits your requirements.

In this option we will deliver your product free of charge but it will take 3 to 5 working days for the product to be delivered.

If you want your desired product to be delivered next working day you will have to place your order before 3pm. The delivery charge is £6.95 at the time of placing order. This option does not include delivery on Saturday or Sunday.