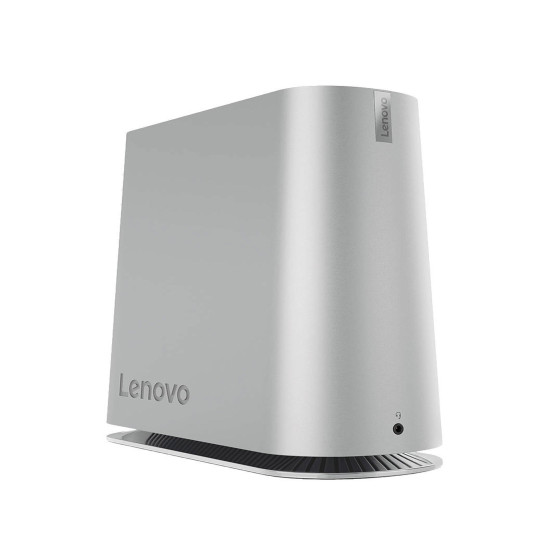 Compact but powerful, the Ideacentre 620s packs the power of a full desktop into a slim 3-liter shell. At 83% smaller than most traditional tower PCs, the Ideacentre 620S will sit comfortably on any desk and will not look out of place next to your TV. The Ideacentre 620S is also more powerul than its small stature suggests -Intel core i5 processors, two-display multitasking support, powerful NVIDIA GeForce graphics and ample storage. It's also equipped with a Dolby Premium audio system and Far Field Microphones, allowing you to converse with Cortana from across a room.

A SMALL PC WITH BIG GRAPHICS

Dramatically improve the most important aspects of your PC experience with discrete graphics. The Ideacentre 620s offers NVIDIA® GeForce® GTX1050 Ti, allowing you to render pictures, edit video, or play games with ease – while benefitting from a faster, more productive PC. With the GTX1050 Ti, harness the speed, power, and efficiency of 768 NVIDIA CUDA® cores, with 4 GB GDDR5 memory.

COOL AND DUST-FREE, FOR A HEALTHIER SYSTEM

With its chrome base design, you won’t have to worry about your desktop overheating. And its cooling system allows air to enter from the bottom and exit through the rear, reducing large amounts of dust that get inside your desktop and improving its life expectancy.

Virtual reality? Try Mixed Reality. Get ready for amazing experiences that draw elements of your surroundings into a virtual world. Windows Mixed Reality brings you immersive games and stunning 360° content, available for the very first time in October 2017. The Ideacentre 620s provides stable-power Mixed Reality; simply plug in your Lenovo Zone headset and step into a new world.

Connect your Ideacentre 620s with up to 2 displays at work or at home, one for work and one for entertainment. No need to switch between programs; we make multitasking easy for you. We also put your combo audio jack at the front, so you can easily plug in your headphones.

Unlike other compact PCs, Ideacentre 620s is equipped with treble and bass speakers. And with Dolby Premium audio engineering, the Ideacentre 620s delivers an immersive sound experience.

CORTANA ANSWERS FROM ACROSS THE ROOM

Windows Cortana is your own voice-activated digital assistant – one who is prepared to answer questions, open necessary apps, set reminders, and even read appointments from your calendar. And with our Far Field Microphones, Cortana can hear you from up to four meters away. Need directions to an appointment but short on time? Ask out loud from across the room as you get ready – the moment you need something, your device is ready to help.