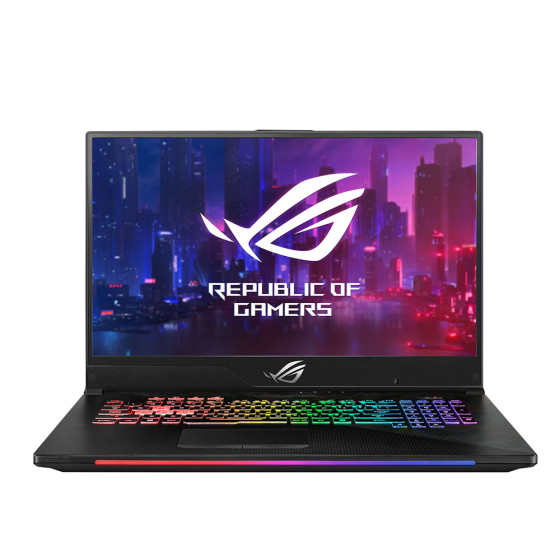 Hot on the heels of its groundbreaking predecessor, ROG Strix SCAR II brings you even more power and style for your FPS esports gaming. Boasting the worlds first 144Hz super-narrow-bezel display with an ultrafast 3ms gray-to-gray (GTG) response time for ultra-accurate targeting, Strix SCAR II has no equals! The fast-responding desktop-style keyboard with Overstroke technology ensures precision control of your armory, while the patented RangeBoost multi-antenna system guarantees ultra-reliable, wide-ranging Wi-Fi coverage. To give you an edge in the heat of battle, this powerful Windows 10 gaming laptop incorporates a HyperCool Pro thermal system: this delivers the extreme cooling needed to squeeze every last drop of performance out of its 8th Generation Intel® Core i7 processor and NVIDIA® GeForce® GTX 10-Series graphics. Upgrade your firepower with Strix SCAR II it's the ultimate weapon for the fiercest gunfights!

To give you the maximum advantage in combat, Strix SCAR II features the worlds first 144Hz super-narrow-bezel display with a 3ms gray-to-gray (GTG) response time a must-have for hardcore gamers and esports players. The extremely high refresh rate ensures a true 144fps experience with minimal input lag, while the superfast response time reduces ghosting and motion blur to yield clearer visuals. The new design also results in less distracting frame, allowing for a more compact body thats 2.33cm narrower than its predecessor. Strix SCAR II is lighter, too, with an overall weight of just 2.4kg that maximises your agility so you can take the fight with you, wherever you go!


LIGHT IT UP WITH AURA LIGHTING

Dim the lights, and watch Aura lighting take center stage. The ROG logo on the lid, the front light bar, transparent WASD keycaps and semi-transparent key sides allow Aura to shine brighter than ever before. Together, they add up to show off your own unique style.

Strix SCAR II is armed to the teeth: its powered by up to the latest 8th Generation Intel® Core processor with up to 32GB of DDR4 2666MHz memory, and a choice of either NVIDIA® GeForce® GTX 1060 or GTX 1070 graphics. Storage isnt an issue, with up to a 256GB M.2 NVMe PCIe® 3.0 x4 SSD and a 1TB Seagate® FireCuda SSHD on offer. However you equip your Strix SCAR II, youre guaranteed combat-proven firepower to rule the game.

The HyperCool Pro thermal system has a host of features to help Strix SCAR II get the most out of its GPU and CPU. Theres an extended cooling plate to spread heat evenly, and two high-performance 12V fans that deliver stronger airflow and increase air pressure to ensure a stable system even under heavy loads. HyperCool Pro also includes the patented Anti-Dust Cooling system that expels dust particles and dirt to improve system reliability and durability.


SET YOUR SIGHTS ON AN UPGRADE

The margin between victory and defeat can be measured in fractions of a second. Strix SCAR II features an IPS-level display with a 144Hz refresh rate and 3ms GTG response time for supersmooth visuals with little or no motion blur. The 300cd/m² panel ensures 20%-brighter visuals compared to low-end IPS panels.

ROG Strix gaming laptops are the first in the world to feature multi-antenna Wi-Fi for 30% more range, higher Wi-Fi throughput, and fewer connection drops. Patented ROG RangeBoost technology combines four antennas located at the back and front of the machine with a unique algorithm that constantly scans and selects the best pair of antennas able to cover each others dead spots, resulting in the strongest possible signal. The latest 802.11ac Wave 2 Wi-Fi standard delivers speeds of up to 1.7Gbps twice that of 802.11ac 2x2 and 12x that of 802.11b/g/n!

A revised keyboard with HyperStrike Pro technology puts decisive control at your fingertips. It features a desktop-inspired layout, four hotkeys, customisable RGB backlighting across four zones, a highlighted WASD key group with transparent key caps, and ergonomic 0.25mm-deep keycap curves for more comfortable typing. Exclusive ROG Overstroke technology enables earlier key actuation and a longer overstroke distance for fast, accurate and effortless keystrokes that increase your actions per minute. N-key rollover technology ensures multiple simultaneous keystrokes are instantly logged, while anti-ghosting ensures no false commands are registered so youre in full control when precision is needed. With a lifespan of 20 million key presses, SCAR II has one of the most durable keyboards to be found in a laptop double that of the current industry standard.

Aura Sync technology gives your entire gaming setup a consistent look and feel. Match the colours of the ROG logo, keyboard and light bar on Strix SCAR II with Aura Sync-supported gaming mice, headsets, and other peripherals. The full spectrum of colours and seven different lighting modes can be easily accessed via the Aura control panel.

Strix SCAR II delivers clearer, louder, and more accurate audio via powerful side-firing speakers that immerse you in sound. Even the slightest sounds can be heard, so youll know where an enemy is approaching from. Smart-amplifier technology monitors audio output and makes real-time adjustments, so you can pump up the volume without worrying about damaging the cones and that makes output up to 200% louder than before, with increased dynamic range and bass. Sonic Studio III provides high quality in-game audio, surround sound for your headphones, as well as improved streaming and audio recording for perfect voice pickup and noise reduction. Every little advantage aids your march to victory and Strix SCAR II ensures you hear every precise audio cue!

Summon up ROG Gaming Center via the ROG hotkey to view a comprehensive dashboard filled with loads of useful information, including both CPU and GPU frequencies and temperatures and use the control panel to make adjustments in real time. It gives you access to ROG GameFirst, GameVisual, Sonic Studio, Sonic Radar, Aura Core, and XSplit Gamecaster, and you can even adjust fan settings! Your game preferences and parameters can be saved in the cloud so you can access them even when you change laptops. Download the ROG Gaming Center app to your Android or iOS device so you can keep all the controls close at hand.