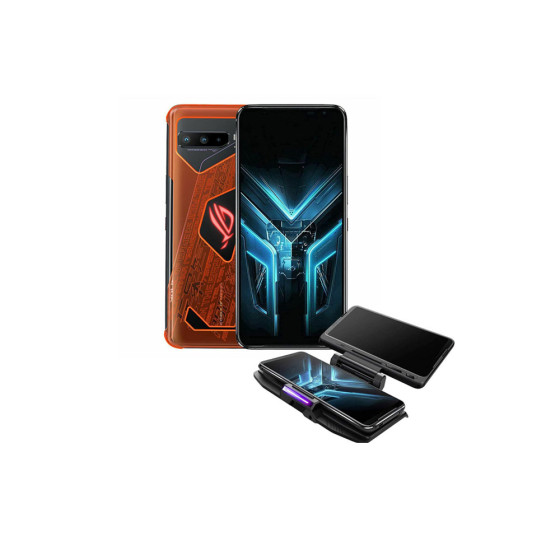 The 6.59” AMOLED panel with 10-bit HDR10+ support is not only color accurate but faster and brighter than the previous generation. Lightning-fast 144Hz refresh rate with 1ms response. The touch latency is now down to a record low 25ms with a 270Hz touch sampling rate. Eye comfort has also been considered as it has received TÜV Low Blue Light (Hardware Solution) and Flicker Reduced certifications.

The 2.84 GHz high-frequency CPU in the speed-binned Qualcomm Snapdragon 865 Plus Mobile Platform is accompanied by an overclocked Adreno 650 GPU that can deliver up to 10% better performance. Together with the fastest smartphone storage available (UFS3.1) and 8GB of LPDDR5 RAM, you have the fastest Android phone ever built.

ROG Phone 3 was designed from the get-go to be the same physical size as its predecessor - despite this, and the addition of the 5G modem and 5G-antennas, it still sports the biggest battery of any flagship phone – a whopping 6000mAh for all-day stamina.

The speakers have been upgraded. They now have 7 magnets for more power and less distortion. One of the speakers is slightly larger with an extra-long throw in order to play even deeper bass notes. However, the real boost in sound quality comes from our new partnership with Swedish company Dirac, which is one of, if not the best when it comes to digital signal processing. Their hard work is mainly appreciated in sophisticated home cinemas and some well know luxury car brands. Together we have achieved a wider, clearer and deeper sound that is truly remarkable.

The 3rd generation of the cutting-edge GameCool system, features a 6X larger heatsink, redesigned 3D vapor chamber and a larger graphite film. It does not only spread the heat over a bigger surface like most phone cooling solutions but also moves it outside, resulting in lower and more stable temperatures during long gaming sessions.

The touch-sensitive Ultrasonic bumper/shoulder buttons with haptic feedback can do more than ever with the AirTrigger 3 technology. Now supporting both sliding, swiping and the possibility to divide each button in two partitions for tapping. Resulting in up to four shoulder triggers. AirTrigger 3 also features a single shake to control on-screen input, giving you a total of 5 additional actions that are comfortable to use. AirTrigger 3 can be used even when not gaming. With a simple long- or short- “squeeze” in portrait mode you can activate customizable and useful actions.

Cannot stop gaming even though the battery is running low? Just put the USB-C charging cable in the Side-Mounted Port and it will not get in your way while gaming in landscape mode. It also works with USB-C to HDMI, USB-C headphones, or the AeroActive Cooler 3.

The compact AeroActive cooler 3 is a bundled accessory that does not only direct air to the GameCool 3 cooling system, it also has a kickstand, a 3.5mm headphone jack and a Type-C port, so you can charge it while using standard 3.5mm headphones. The fan is both silent, efficient and does not require external power.

X-Mode and Armoury Crate are the cornerstones of the performance tuning & customization in the ROG Phone series. X-Mode now allows you to set a wider variety of performance parameters, from CPU/GPU performance to touch sensitivity settings and display refresh rate. Through Armoury Crate, users can customize all the performance, touch, display and network-related settings, down to individual game level. Allowing users to customize their experience per game, in the way they like it.