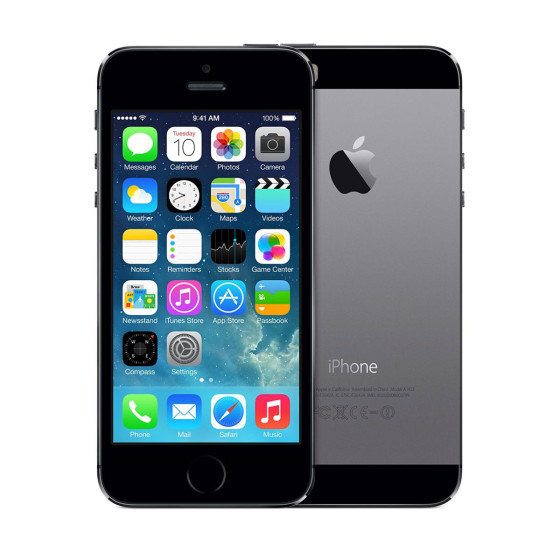 Apple introduces its new flagship phone, the Apple iPhone 5S. To promote and encourage innovation, Apple introduced a chip with 64-bit architecture, a fingerprint identity sensor, a better, faster camera and an operating system built specifically for 64-bit. The Apple iPhone 5S has a sapphire crystal protecting the iSight camera and is included in the home button, has a beautiful aluminum housing and sleekness of metal and glass.

Fingerprint Identity Sensor
The new smartphone comes with Touch ID, a new fingerprint identity sensor which makes sure no one else can access your phone. The Fingerprint Reader is built into the home button and unlocks by putting your finger on the home button keeping your smartphone extremely secure. Your fingerprint also approves purchases from the iTunes Store, the App Store, and the iBooks Store. The Touch ID is capable of 360-degree readability which means whether its portrait or landscape, your iPhone reads your fingerprint. In addition, it also lets you enroll multiple fingerprints.

A7 Chip
The Apple iPhone 5S is equipped with the new A7 chip which gives you CPU and graphics performance up to 2x faster than the A6 chip. The A7 chip makes the Apple iPhone 5S the first 64-bit smartphone in the world. The A7 supports OpenGL ES version 3.0 to deliver detailed graphics and complex visual effects which was possible only on Mac computers, PCs, and gaming consoles. iOS 12 and all the built-in apps are optimized for the A7 chip. The Camera app takes advantage of a new image signal processor which is built into the A7 to give you up to 2x faster autofocus, faster photo capture, and higher video frame rates.

M7 Coprocessor
The new M7 coprocessor is designed especially to measure motion data from the accelerometer, gyroscope, and compass without continuously engaging the A7 chip. The M7 knows when you’re walking, running, or even driving. The Apple iPhone 5S would not ask you to join Wi-Fi networks which you come accross, if your smartphone has been idle for a while, the M7 reduces network pinging to spare your battery.

Larger sensor, pixels and aperture
The new iSight Camera has a 15 percent larger sensor, bigger pixels measuring 1.5 microns and an aperture of ƒ/2.2.

True Tone Flash
A white LED and an amber LED work with intelligent software algorithms to adjust the flash intensity and color temperature by using over 1000 unique combinations.

Slow-Motion Video
It lets you shoot a video at 120 frames per second at 720p and play back any section at a quarter speed for a dramatic effect.

Live Video Zoom
Live video zoom lets you zoom in up to 3 times you are recording.

Square Photos
With the square mode. the iSight camera automatically frames and crops your shot to a square format.

Panorama Photos
The Pano mode lets you capture panorama photos with dynamic auto exposure that adjusts as you take the shot.

Photo Filters
Apply filters to your still and square photos.

iOS 12 was designed with the Apple iPhone 5S in mind as it takes advantage of the 64-bit A7 chip, the Touch ID fingerprint identity sensor and the iSight camera. The iOS 12 also introduces new features like smarter multitasking, AirDrop, and Control Center.

Built-in Apps
The iOS 12 comes with an incredible collection of apps like sending email and texts, browsing the web, shooting and sharing great photos and videos and getting directions. The built-in apps are optimized to take advantage of the A7 chip’s high-performance 64-bit architecture.

Phone
Siri lets you make calls, reply to a call with a text message and much more.

Calendar
The calendar app lets you view all your schedules at a glimpse.

Mail
Read your mail and easily manage your inbox.

Photos
The iCloud Photo Sharing lets you share your photos and videos with specific groups of friends.

Music
AirPlay lets you play your iTunes library anywhere in the house.

The App Store includes over 900,000 mobile apps which includes games, education to entertainment, social networking to finance, and so much more.

iPhoto
Organize, edit, and share the photos you take with your Apple iPhone 5S.

Numbers
You can make dynamic tables, charts, and spreadsheets.

Podcasts
Play, discover and subscribe to podcasts of all genres.

iBooks
You can build your own library.

iCloud lets you access your content whether you are using your iPhone, iPad, iPod touch, or Mac. With the iOS 12, you can use iCloud Photo Sharing to send photos and videos to your friends’ iOS devices. In addition, the new activation lock features of Find My iPhone make it extremely difficult for someone who is not you to use your smartphone.